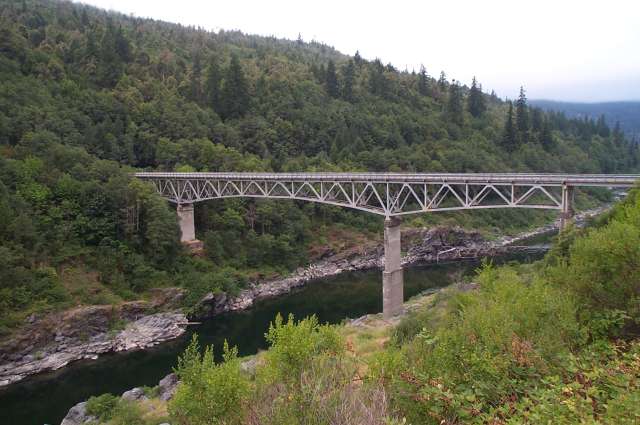 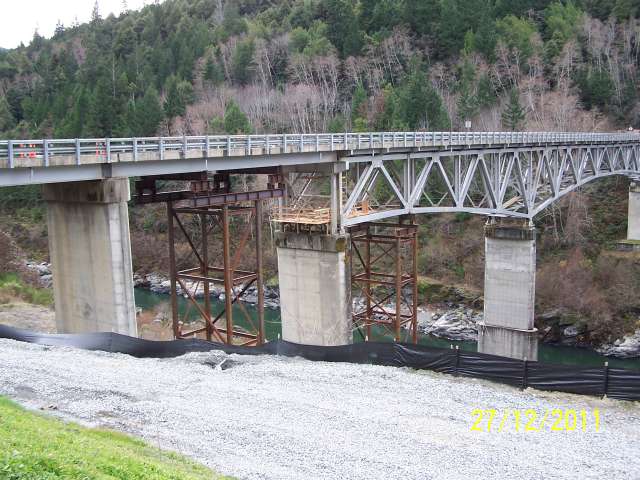 The Martin’s Ferry Bridge carries local traffic on Bald Hills Road over the Klamath River near the intersection of SR 169. The six-span structure consists of three steel girder approach spans and three steel truss spans. The original structure was constructed in 1959. During the 1964 flood, the west end of the bridge from the abutment to the superstructure pin adjacent to pier 2 was destroyed. The destroyed portion the bridge was replaced the following year. In addition, the hillside at the northeast approach to the bridge is an active slide which has resulted in damage to abutment 7 and piers 5 and 6.

On December 3, 2007, Caltrans closed this bridge and notified the Federal Highway Administration (FHWA) that the bridge was at high risk of collapse due to continued movement of the slide, and that an Emergency Repair was required. The County amended MGE’s existing contract to add the preparation of the PS&E for the emergency work. MGE completed the PS&E for the work within a 3 week period. This was done to expedite the completion of the work to allow re-opening the bridge to limited traffic. The design involved the development of plans for temporary supports that provided the necessary strengthening and would not impede the construction of the ultimate retrofit/ rehabilitation.
The temporary repair scenario included construction of temporary pier towers on either side of Pier 5, which had displaced over 19″, installation of CIDH buttress piles behind Abutment 7 to stabilize earth movement that caused the failure of the Abutment, and the addition of large diameter drainage galleries to provide positive drainage of the soil behind and below the eastern portions of the bridge. A monitoring system was installed to monitor ground water levels in the drainage galleries, movement of earth above and behind the bridge, and a system of monuments to track horizontal and vertical movements.